It is a very strange evening. I guess it’s not really evening. It’s actually moving on midnight.

I spent yesterday afternoon in the Lhakang at the Monastery. It’s Losar time. And Mahakala puja started today. Mahakala is the protector of the Kagyu Lineage. A fierce Thunder Being in his own right and he travels with a retinue like no other.

In my understanding, Mahakala represents the possibility for changing patriarchal rage to wrath. The perfection of such aggression accomplished and directed in a wrathful way. A mirror for our ability to slay the demons of misappropriated anger and rage within ourselves and find a good way to come.

We can take the hurt and the pain of “reality”, recognizing the emptiness (possibility and potential) of the relative and pull out to see the ultimate. The bigger picture. 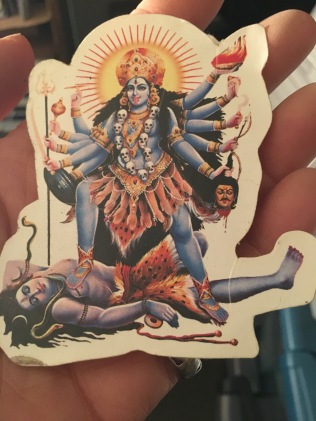 These days, I call Kali to mirror the perfection and my own feminine power to meet the masculine and dance.
Kali…. here in hand, the mirror to my own centered knowing. No time for the fight in this heart. The transformation is now  in every now. The dance  continues..

I couldn’t have chosen a better day to begin the prayers in this way, on 2/22 at 2:00, as 2,700 or so miles away the armed forces were set to empty the main encampment and others, in Standing Rock, North Dakota.

For the last year, my heart has been directed to that land and the people who live there since hearing the call to stop the Dakota Access Pipeline. Aka DAPL. Aka The Black snake (or a slice of it anyway…).

I heard the call from the youth, to #RezpectOurWater.
To take a hard look at the idea of poisoning twenty million people with a pipeline passing hundreds of thousands of gallons of crude from the dirtiest oil fields available, between the Standing Rock Tribe and those downstream and their drinking water intake.

It took a while. But people from across Turtle Island and later the whole of Mother Earth came in heart and mind. And thousands brought their bodies.

My time on the land was gentle. The grass was still moving in the wind. The wind full of messages from many ancestors, was not frigid. The sun soaked in quickly to the core of our bones. The songs just kept coming. The prayers just kept coming. The love just kept flowing. And the truth was clear. This land had… already blessed, was being blessed again thousandfold.

Prayer after prayer. Singer after singer. Song after song. At that time, you could pretend for a moment or two that there wasn’t a battalion of earth batterers just over the hill.

And that was why we were there.
We were coming in solidarity, we were coming to add eyes and ears and bodies to witness.  As protectors. Of the water. Not saviours of the people… Protectors of the water.

Now, as accomplices, we must learn to transform our rage and be skillful with our wrath. As water protectors, as carriers of protection prayers, we must come in solidarity with every fiber of our beings in the holding of the vision. Yes. We can see the injustice.  Some experiencing great pain to put their bodies literally on the line  between injustice and the truth of love and honor.  And we are given great example. The elders showing us, that we must be that love and hold that honor and come to be the mirror and balance what we seek to change.

We must get behind the prayer with no intention to lead with our own egos.  We must know what it is we came to do and hold that. Tested by the opportunity to become that which we seek to change or become the change we seek

The ancestors calling us back to the flow.

Listen to the songs they have gifted.

Not long after I left the land, clutching to whatever piece of knowing that I could muster, that I would return. That my heart was not being ripped from my body. That my family would be okay… the militia moved in.

And I felt powerless.

Well. The family I came to love in the Black Hills. They know power. They know strength and they know how to withstand the onslaught of greed and entitlement. 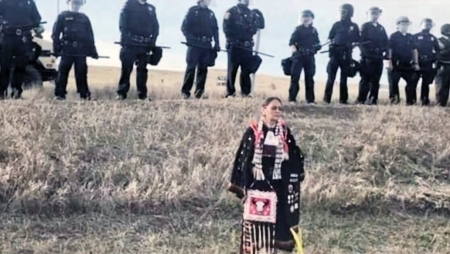 But why should they have to? And why did I take so long to give my heart to them?

Why did I first learn of Standing Rock when they were calling for help?
Why didn’t I know?

Because my sheltered life only shows me what I open my eyes to.

So now my eyes are open.

Woke. The ancestors have always been awake within my being. Now I am listening for them all.  finally.

It doesn’t make me any more righteous to ignore my native roots simply because I detest the exotification of people.
It doesn’t make me any less of anything to embrace the fullness of myself. And the ancestors connected to my DNA, be they Croatian or Dutch, Arapaho or Blackfeet… Caribbean… or whoever they are despite what I have been told… they all want to know where the hell I have been.

They are talking to me and to eachother. The colonized. The enslaved and the colonizer…

Of course! No wonder I have been so conflicted about allowing my power and strength to be diminished over the course of this lifetime.

As I would get closer to the plateau I would find myself questioning. Or simply being blindsided by that other shoe.

Wow! I can see clearly how within my own system, this micro of the macro was playing out.

And has been since day one. The warrior in me rising to be consumed by the colonizer. Taking up space. Taking the space with inane bullshit only to meet the enslaved, grappling for a moment of peace.

And so yeah. The mind is a wonderful place to play out all kinds of shit. And that mind of ours has more power than we think. It really isn’t a game board and the skill it takes to do the mapping without the shit playing out… wow.

I have a lot to figure out. But the clarity is stunning. It is making such sense.
And the ancestors are dancing.

So today I am rather numb. Perhaps a bit more flatline than I was yesterday when I began to write this piece. I had to take myself to numb. Bouncing between total love and appreciation to numb is a far shorter journey than climbing from despair to love and appreciation.

Because while it would be super easy… to stand in my fear and my worry and my tears and my anger and rage at the MCPD and the ACOE and ETP the agitators and the egos and the thoughtlessness… that would not be fair.

It would be like going to camp, Setting up my tent and my latrine and making sure I left it all there for others to clean up.
It would be just like that–energetically.

Those remaining at camp have enough to clean up huh?

I believe that our vibration is where we last left it. So I want to leave my heart on the land in a beautiful way.

If I take my pain and suffering and fear and twisted up projections of my own stuff, call it love and put it into the mix… I may as well smear my shit on those I “pray” for from that painful place.

So I pray and I sing and I hold as much joy and I can. And I send that out to the Water Protectors.

No room for anything else.

Calling all of the protectors from all directions. I offer the sweetest places in my heart. With love.

We can be everywhere in prayer.

We cannot pray and worry in the same moment.

We cannot love and fear in the same moment.

We cannot judge and allow in the same moment.

We can choose to stand in our power. Anywhere. Any time.
And In a Good Way.

4 thoughts on “How shall I bring my prayer?”