18 years ago today, at about this time, on the tuesday after laboring for 75% of Labor Day weekend, I realized that I was going to have to transport to the hospital. I was not walking around the block again, and I was hungry, tired and ready. I sent my mother to our teacher, Khenpo Karthar Rinpoche and told her to get some blessings of some sort. She came back faster than she has ever gone and returned to anywhere and said, Rinpoche says go to the hospital RIGHT NOW.

So we did. And I felt safe, and because we went RIGHT NOW, the right doctor turned on his heel, out his coat back on and got the party started. Then he stepped out of the way and watched my midwives deliver Chog, one arm by his head, exactly like they expected.

The doctor was awestruck to watch these women do their thing as though he had never delivered a baby before. He had but he just did it the white mans way and they did it the right woman’s way and with his creeds and their wisdom and knowledge, the most incredible human I have ever birthed came out.

Khenpo Rinpoche named him  one week later. Now, 18 years later… I couldn’t be more proud of him, myself, and couldn’t be more thankful to all of the people who make up the village. You know who you are…

Same exact kind of day, same feeling in the air, I am taking a super massive next step in acceptance of role as parent. There are these stages, and you have to accept them. Period. There is no other way to put it. You can’t control, you can’t direct, you just accept. Or at least you try.

We had a robins nest at the door this spring. And I happened to walk out of it the moment they fledged. They really don’t get back into the nest… That Empty nest still sits in the light fixture, reminding me that mine could be empty soon… And that is okay no matter how hard it may be to fathom. 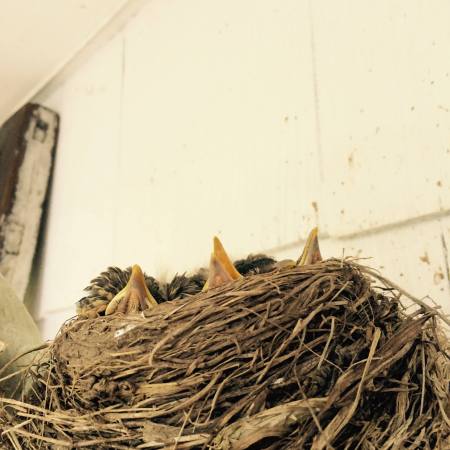